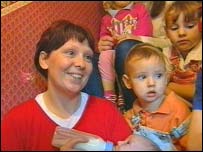 Sue Povey, a self-confessed “babyholic” who lives with her husband Ian and 13 of their children in a six-bedroom house, first became a mother in 1980.

Since then the couple, from Swindon in Wiltshire, have never gone much longer than two years between babies.

Isabelle, who weighed in at 6lb 15oz, is the latest addition.

Mrs Povey, 43, is now at home with the baby, while father Ian – a supply analyst, said his excitement at the birth of his 15th child was the same as his first.

The couple now have nine girls and six boys.

“It’s like a drug. I definitely want another one. I think having babies keeps me young.”

Her 43-year-old husband said: “There’s no stopping her now. But it’s getting a bit tight on room.

“I don’t know if we will set a limit – it’s a bit early to say. But we can’t go on forever. Nature will eventually take its course.”

Isabelle was the first of their children to be born at Swindon’s new Great Western Hospital but at the one it replaced, the Princess Margaret Hospital, the maternity ward was nicknamed The Povey Unit.

The couple’s eldest daughter, Rebecca, 22, has her own home and a daughter Caitlin, two, while 20-year-old Hannah is at university.

The UK record for the most children is held by Margaret McNaught, from Birmingham, born in 1923, who had 22 children.