A mother-to-be expecting twin girls spent nine heartbreaking days grieving after a hospital mistakenly told her one of her babies had died.

Lisa Cornish, 27, had been overjoyed when she first learned she would be giving birth to twins.

But her ecstasy soon turned to agony when a consultant erroneously told her that  one of the twins had died.

To make matters worse, heartbroken Miss Cornish was also told that she would have to give birth to her dead baby, which she had already named Paige, alongside the healthy twin Paris.

But what Miss Cornish hadn’t counted on was an error of monumental proportions by Birmingham Women’s Hospital when, during a scan nine days later, they realised that Paige was actually alive.

Miss Cornish’s ordeal began when it became clear that the babies were suffering from a condition called ‘twin to twin transfusion syndrome’, a disease of the placenta that affects identical twins.

In April, the mother-to-be was transferred from the city’s Good Hope Hospital to the Women’s for an operation to laser blood vessels connecting the foetuses.

That operation was deemed a success but just one week later Miss Cornish was told she needed another operation to remove excess fluid from around the bigger baby, Paige.

When that procedure also went without a hitch, Lisa and Freddie thought they could relax and enjoy the rest of the pregnancy.

But at the 20-week scan on June 1, the couple were devastated to be told by consultant Mark Kilby that Paige had no heartbeat and was dead.

‘It was horrible,’ said Lisa. ‘I didn’t know what to think. I was so distressed.

‘It was so hard to explain, all the kids were asking me: “What’s happened? Where’s the baby gone,” and I didn’t know what to tell them. 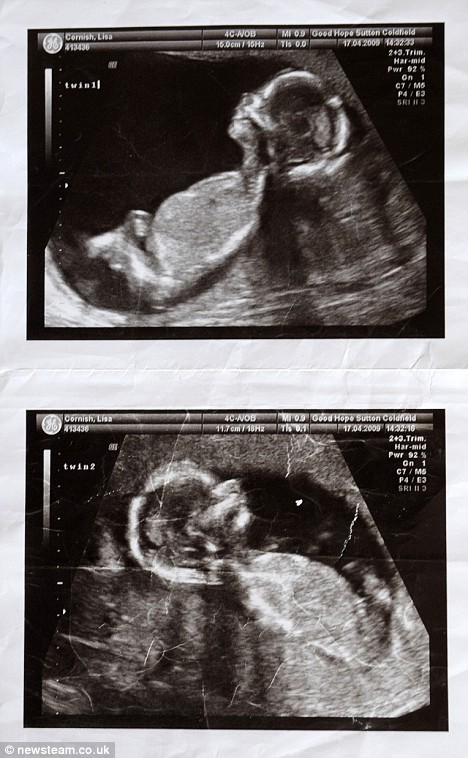 ‘It really shook me up. I went to the doctors, and I’d had so many problems already this was the last thing I needed.

‘He said there was no heartbeat for the bigger baby, I was absolutely distraught and so shocked, I couldn’t believe it. I was crying and upset.

‘The doctor also told me the baby had to stay inside me until birth, which was hard to hear.

‘I couldn’t sleep and I was all over the place. The worst part was having to tell the kids, they’re so young and they don’t understand that sort of thing do they?

‘My partner was really upset and it affected my whole family. It changed things, we had to get on, so we started looking for clothes for just one baby and were looking at smaller buggys than the one we wanted.

‘I went back for another scan and I was told their was a heartbeat, the doctor was stunned, he said it was a miracle and didn’t know how it happened.

‘But I was overjoyed and relieved, I was crying, I didn’t know what to do. I couldn’t think properly.

‘I rang my partner and he was so happy, he started to tell the kids, but they were asking more questions, like how did it happen.

‘Those nine days were hell. I’m overjoyed to learn that my baby’s safe though.’

Father-to-be Freddy, who works as a gardener, added: ‘We didn’t know what to do. We were even thinking about holding a ceremony because we wanted to do something to remember Paige.’

‘I just can’t stop thinking about it. We’ve another scan next week and we’re just so scared in case we hear more bad news.’

A spokeswoman for Birmingham Women’s Hospital said Prof Mark Kilby was an extremely experienced consultant who had genuinely believed the foetus had died.

‘We are extremely sorry Lisa and her family have suffered and hope the rest of her pregnancy progresses smoothly.’

The couple have two other children, Scott, five, and 16-month-old Callum.