Mum of four, Carine was worried about the pain of labour before her first birth but also felt that giving birth without feeling anything seemed strange. So, birth in water seemed to offer the most effective natural pain relief. Her story illustrates how, with a little persistence and good luck, you can have the kind of birth you want.

I decided to write “Birthing pool” in my birth plan

I was asked to leave the bath

My second attempt at a water birth

What I love about homebirth

I decided to write “Birthing pool” in my birth plan

When I got pregnant with my first son, like most first time mums I started to worry about labour pain. All my friends had chosen epidurals and were advising me to do so as nowadays there is no need to experience childbirth pain.

Although the idea of a painful labour was obviously not very appealing giving birth without feeling anything seemed strange. I was actually very curious about knowing what it was like. After reading that water was considered as the most effective natural pain relief, I decided to write “Birthing pool” in my birth plan. The community midwife informed us that there was only one pool at our hospital so it may not be available and unfortunately this happened on the big day.

I was a bit disappointed, but was offered to use the bath instead which I gladly accepted. The relief was immediate and my labour progressed steadily. After all, may be birth was not supposed to be so painful…. little did I know that I would end up giving birth 18 hours later under an epidural.

I was asked to leave the bath

Due to shortage of staff I was asked to leave the bath in the middle of hard labour and put under monitor as midwife could not be present all the time. On my back and unable to move, the pain quickly became unbearable. From that moment it was the usual cascade of event which leaded to an epidural and a very difficult birth. It took more than 12 hour for my cervix to dilate from 7 to 10cm.

The whole experience actually confirmed my belief that pain was manageable especially with the help of warm water and that only the wrong environment and wrong people around me had made it unnecessary more painful that it was supposed to be.

My second attempt at a water birth 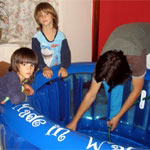 The birth of my second boy could not have been more               different. Leaving now in SE London in an area where midwives are really pro homebirth and waterbirth, I was at first offered a home birth. At the time we were just back from a long trip in Australasia and sharing a flat with a friend so home birthing was not an option and I hoped again for a waterbirth in hospital. My contractions started on my due date and luckily this time the birthing pool was available.

I had the same midwife through the whole labour and as no one asked me to leave the pool in the middle of it, it took only two and a half hours to deliver my baby underwater. No one needed to order me how and when to push, I could feel my whole body working and helping my baby moving down the birth canal. The burning sensation as his head crowned was overwhelming but staying in total control made the experience much more enjoyable than giving birth under the effect of the epidural.

I really appreciated the privacy that the birthing pool gave me and unlike my first birth I felt completely relaxed about pushing the baby out without anyone staring at my bits. Not being laid on my back with my leg up also meant that I could see my baby being born. Well “once a waterbirth always a waterbirth”, I went on to have two more baby girls both born at home in La Bassine Birthing pool that I had the chance to design myself.

The birth of my second daughter Carlita born this September, really make me appreciate the benefit of labouring in water once again. I had suffered from severe SPD during the last two months of my pregnancy and my movement were really limited. I don’t think I will have coped with the pain if I had to be on dry land or worst lying on a bed. When the contraction started I was very grateful that this baby seems decided to come early as I was only 38 weeks. It was 4pm; the boys were back from school and playing in the garden. The contractions quickly intensified and at 6 pm I called the hospital. The midwife arrived half hour later and after I put my little girl in bed, she decided to check how far I was. Hooray, I reached the magical 5 cm which meant that we could start filling the pool.

The boys helped daddy to set up the pool (see picture below) and checked the water temperature, it took just 20 minutes for the pool to be ready and by 7pm I was in. Not suffering anymore pain in my pelvis thanks to the buoyancy effect, I could now concentrate on the contractions; breathing and choosing whatever position felt comfortable. The boys kept busy by covering the house with extra absorbent pamper mat and then sat very calmly next to the pool, watching carefully through the transparent wall as they did not want to miss the baby coming out. Eventually, 1h30 later, they got bored and decided to go to bed asking to be wake up when the baby would be here. I was feeling so relaxed myself that it was difficult to believe that I was in active labour. Finally I decided to get out of the pool to get things moving. Well only 10 minutes out of the pool, and I was screaming to be helped back into it. The contractions were following odd patterns very close for few minutes and then space out and again close. Although the pain was really sharp it never last for long and I found this labour to be the easiest of all four!

At 10pm I could feel the baby making her way down, the contractions got very intense and painful, I knew I was about to give birth. The pushing stage proved to be much harder than the labour itself. Finally after three big pushes and a very loud noise I managed to get the baby’s head out. I touched her head waiting for the next contraction to push the rest of her body out, but nothing seemed to happen. After 2-3 minutes, the midwives asked me to push even though I had no contraction. I tried but with no much success so they asked my husband to help me stand out and the shift of position and the help of the midwife hand, her body finally slide out. A beautiful baby girl weighting 4kg, my biggest delivery … no wonder she was so hard to push out.

What I love about homebirth

While we were both being checked by the midwives, daddy started to empty the pool. Although we were supposed to get a water pump this time, the idea got lost somewhere and DH used the old fashion bucket like he did for our first daughter. I suspect that he actually enjoys this bit, where he can at last use its man strength. Fortunately the pool contains only 400 litres and after one hour and 80 buckets of water the job was done. It was now passed midnight and the midwives decided it was time to leave. I enjoyed my favourite hot chocolate with French bread and home made Jam before going to sleep in my own bed with this new bundle of joy attached to my breast. That is what I love about homebirth.