A new member of the tribe arrived last night at 9:14pm but not without a fight.  Apparently, Calder liked his mommy’s womb so much, he was hesitant to leave it. Can’t say as I blame him. Karin labored for nearly 40 hours. She did not take any drugs for the pain, which was, at times excruciating. Karin took control at 9pm and taught Calder his first lesson – about who was in charge. She simply insisted he come out and meet his parents. Despite repeated attempts to scurry back up into the safety of the womb, Calder came out with his mouth open, screaming his presence to the world. He does not yet have the power of words, but I’m pretty sure he was saying HERE I AM.

Karin was simply amazing. She is the strongest person I have ever known. You have never in your life seen anyone so calm, so brave, so focused, so dedicated to her child. Karin was a hero last night, to me, to our baby, and truly to anyone who saw her struggle. It was the hardest thing she has ever done, and she stepped into it with power, with grace and with unfathomable courage.

In the last 30 or so years, Motherhood has taken a hit in some quarters, by some feminists, as something less than befitting a strong modern woman. While surely that attitude has resulted from the years of patriarchial oppression of women in modern western society, nothing – nothing- could be further from the truth.

Any woman who ever doubts the nobility, the beauty or the honor of motherhood, should have been in that room with us to witness what I saw – a woman in complete control of her body and her life, fully conscious and capable of ferocious, irrepressible love. And any man who ever doubts a woman’s ability to accomplish anything, anything, in this life has certainly never seen one in her finest moment. I was fortunate enough to bear witness to one such woman, in one such moment, and it was something to see. I plan on telling my son this as soon as he is able to understand the words. And he will understand. 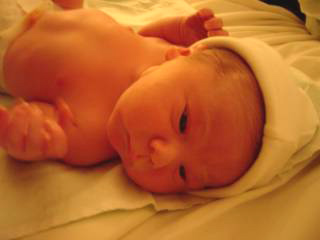 He will understand that his mother is a warrior of peace. A warrior of love. Karin suffered pain and mental exhaustion to ensure that her son, my son, our son, would be born into his life fully conscious without any drugs coursing through his veins, and subsequently fully aware of his entry into the world. She fought for his health. She fought for his spirit. She fought for his life. And he appreciated it. Calder took to his mothers breast immediately. He hugged her tight in his first minute of life while the umbilical cord, still attached to his mother, pulsed gently between his skin and hers.

So Calder is born unto this world with a crushing, all encompassing love and respect for the woman in his life. Many men forget this. I will make sure this young man never does.

I have never had more faith in the human race than I do right now. I am joyful and hopeful for this world because of this baby, the woman I married, and the lesson I learned last night about how truly powerful human beings can be.