Assisting a Warrior Mother Through Her Independence

I had the privilege of attending a Warrior Mother during her birth on July 4, 2004. It was truly “Independence Day” for her. The outcome, a completely natural vaginal birth, was a triumph, but not the most important detail. Because, to be only outcome focused would have done her such a disservice.

We all know how things can change in an instant – what if birth had asked her, once again, to surrender to a cesarean birth? She would have been a Warrior, still.

However, the birth fairy graced her with her wish – a vaginal birth and a beautiful healthy baby girl.

She began early labor contractions at midnight; we stayed in touch throughout the night. This labor was acting much more like a first time birth (her cesarean birth was a classic “failure to progress” induction at 41 weeks for “ruptured” (a high leak) membranes (so why did he need to break her water later, hmmm?) – i.e. FAILURE OF DOCTOR). I joined her at 9am (she was two days past her due date this time), we labored at home until she begged to go to the hospital (her midwives wanted me to keep her home longer). When we got to the hospital at 3:30pm she was 2 cms, “shitty cervix” (I quote the Midwife on the phone to me) baby at -2 station.Midwife wanted her to go home. 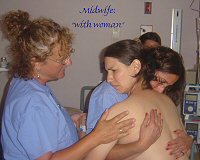 I knew staying was what would make her feel safe, so I negotiated and she stayed. After monitoring (when she begged for an epidural – back labor, oh nooo!), I bargained, “you can get the epidural, but can you cope in the shower first?” “YES!” After she got up (yes, yes, I know, but they couldn’t get a variable tracing on the baby except with her lying on her right side – proof again the we probably had a posterior baby) we immediately went to the shower. She said it was SOOO much better (yay!). We stayed there until 5:20 when the nurse wanted to check her so she could report to the midwives. HALLELUIA she was 6 and 80% effaced further than she ever got the first time! Maybe it was the all the Hail Mary’s I said in the shower! I also got her into an asymmetrical lunge on the shower chair and the baby rotated (Thank you Labor Progress Handbook!)! WHOO HOO! She was completely re-energized and never even mentioned an epidural again. 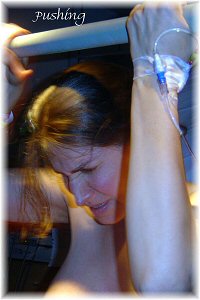 I was soaked, from the knees down – who cares!

The midwives rushed to the hospital – one still in her bathing suit! LOL! By 8 pm she was 9 with a lip and singing beautiful whale music.

She labored draped on her husband with my Rebozo over her shoulders, protecting her birth energy. All the women in the room were in awe of her courage and strength as she labored. I did nearly constant sacral pressure from 12 noon to when she started pushing (if anyone else didit it was “annoying”).

Pushing was incredibly hard for her, she was very afraid. We triedevery position imaginable; side lying was the most productive. Baby wasstill posterior, but not direct-OP; she turned in the birth canal,causing a huge skid mark and was born at 9:55 pm!

I missed a wedding for this birth and I tell you I wouldn’t have it any other way – what an awesome experience!

I can highly recommend The Midwives of Denville and St. Clare’s Hospital Denville – every single person was committed to her!

One of the midwives said, “Isn’t this the best job in the whole world?”

Let go into the clear light, trust it, merge with it. It is your own true nature, it is home.
-Tibetan Book of the Dead